According to a press release issued by the Press Information Bureau (PIB), a case of outright smuggling of Pakistan origin cosmetic products weighing 2800 kg was detected. The goods were being routed through Abu Dhabi under the guise of household articles to evade detection.

“A lot of 87 consignments had arrived by flight no.  EY 218 from Abu Dhabi. Upon examination 84 consignments were found to contain cosmetics of Pakistani origin while 03 consignments were of perfume concentrate from Bahrain. Any imported goods originating from Pakistan attract Basic Customs Duty at the rate of 200% of the value of the goods. The goods were attempted to be cleared through courier mode by mis-declaring the origin and description of goods, value and, thus evading the applicable customs duty and IGST leviable. The duty sought to be evaded is more than Rs. 1 crore,” said the PIB release.

For smuggling the goods and to evade detection, 87 unique names and addresses of the consignees (recipients) of the said consignments spread across the country were used, however, the goods in all the bags were found to be similar. The matter is under investigation to unveil the real evader who is suspected to have used different names and addresses of the ghost recipients. 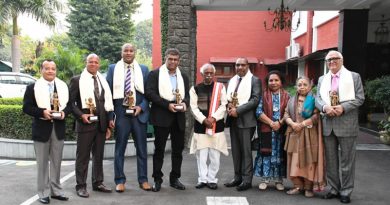 PM Modi has given power to states to promote foreign trade: Guv to ambassadors