Life was going perfectly fine as I was having the best of times lying in my bed in this cold weather eating homemade food cooked by my Mom when suddenly, one day, life took a 360-degree turn.

On January 3, I had a fever so I took the medicine and went to sleep.

I was feeling better in the morning, as the evening came, my fever increases.

I started feeling dizziness and pain in my knees.

I was all set to go to my college for a workshop organized to train the come to train those aspiring to become YouTubers.

I took medicine in the night and tried to take some rest, But I could not sleep and I was badly tired. I tried to watch some good web show so that I will get tired and go to sleep finally but I couldn’t. Then I thought maybe I’m ignoring my deep thoughts of depression.  I admitted to myself that I am depressed since started college in October end. Then, all the wrong thoughts started coming to my mind. Suddenly, I was shivering under a thick blanket and sneezing. This continued throughout the night.

My mother heard me sneezing at 5 am and told me she will get me tested for Covid today.

I told my mother to wake me up at 9, as I had slept at six. I was half-awake in the morning called my Dean sir to inform him that I won’t be coming today.

I messaged about my leave in the WhatsApp group.

That day, my father took me and my mother for a check-up.

When we were getting checked, I noticed that people were standing in groups.

I told them to stand in a queue like good citizens.

We returned home at 2 pm and for the entire day, I didn’t have any food or anything else, till my father asked about the lunch.

At the same time, I messaged my two friends to get tested for Covid as my mother and I had already isolated ourselves and were waiting for the results of our RTPCR tests.

On the night of January 5, I had a fever and shivers. I used two blankets to cover my body. The next day, I took my classes normally. As my father was busy, I myself went to the hospital to collect the reports.

I was completely confident that it’ll test negative and that I have to take some sweets and treat everyone on my way home as my mother was very worried about the results.

So when I was there to pick my result, the receptionist, first, handed over my mother’s report.

“Who is Urvashi?” she inquired. I said she is my mother. She looked at my report and asked, “Who’s Shambhavi?” I said I am Shambhavi.

She looked at me with contempt and said open these reports after going out from here.

I looked at my reports.

My phone was ringing and my Mom was calling. I didn’t pick the phone, as I was completely shocked to find that both my mother and I were positive.

Driving my car on the way back home, I was crying.

I went home and told my mother to see the reports herself, as I had not seen them so far.

As my Mom read the reports, she started crying. When she told my father, he was completely shocked.

However, he kept on assuring my mother and me that Covid was just another viral fever and many of his friends had recovered completely after getting infected. He told me not to worry at all.

When I posted my WhatsApp status as “Positive”, many of my friends started doubting that I was feigning ill to bunk classes.

I felt really bad about it. Some called to ask whether I have really contracted Covid. I told them why I will feign a disease.

I just stopped picking up their calls and answering their messages, as I was dealing with a bigger problem already, and I had to console my mother who was crying continuously while calling her sister on Whatsapp video call.

People were continuously calling me messaging me from my college, my family and from different places.

I was already under a lot of anxiety and the calls were only adding to my anxiousness.

I turned my phone off and didn’t turn it on for hours.

There, my mother continuously cried, called my father repeatedly.

He was continuously trying to connect with all the doctors he knew.

On January 6, the day ended with all this chaos. I was feeling dizzy.

On January 7, we both had a fever. I felt dizzy all day, stood up to do some work but due to weakness couldn’t stand on my feet.

On January 8, my mother started vomiting.

I was really scared to see her like this she used to video call my father to update him on every little change in her health as he wanted to know everything too.

The next day, my fever was 101 degrees. The day after that my periods began and it was painful as I had period cramps, I felt very anxious the whole time.

I’ve had a history of anxiety before, and my mother has been my strength the whole time.

Then on January 12, at night time my oxygen level dropped from 98 to 96 I was really scared and didn’t want to tell my mother because she worries too much for me. The oxygen saturation improved the next day.

Last night, I again had a cold and cough.

Sometimes, I feel I have no escape from this. But hopefully, it will improve soon. My teachers have been very supportive during all this time. I want to thank them from the bottom of my heart. Pandey sir motivated me and Tejee mam told me she missed me, and worries about me which was a very sweet thing to hear at this time.

I hope to be well very soon and wish to attend my classes.

(The writer is a student of MJMC, First Semester at the Faculty of Mass Communication and Media Technology, SGT University, Gurugram) 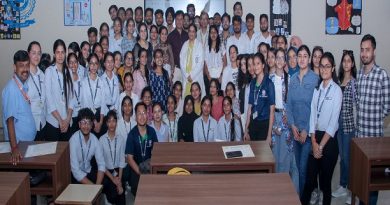 Workshop on Muscle Energy Technique by Faculty of Physiotherapy 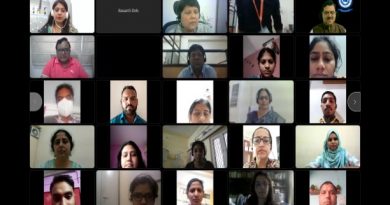