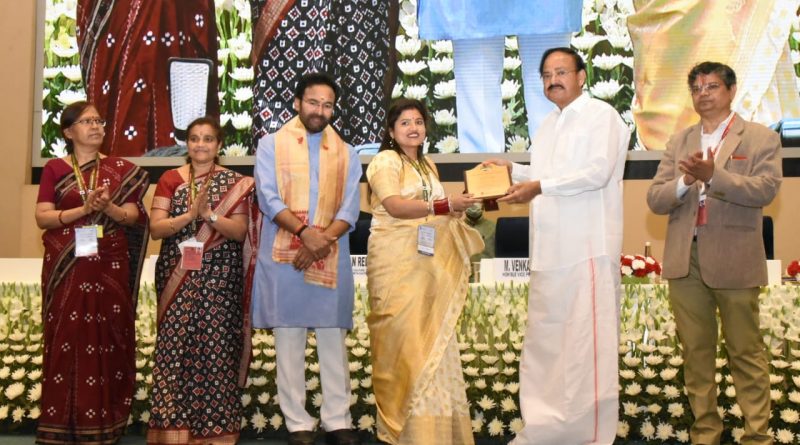 The Vice President, Shri M. Venkaiah Naidu today called upon schools and parents to encourage children to learn any art form of their choice as part of the efforts to preserve and promote India’s rich cultural heritage. Stressing the need to go back to our roots, he called for a cultural renaissance in Indian society.

The Vice President also said that our rich traditional folk art forms such as puppetry are disappearing due to the craze for western culture. They have to be revived with active involvement of not just the governments but society at large. Observing that exposure to creativity and art at an early age will help children become more aware of their surroundings and help them lead a more meaningful life, Shri Naidu wanted educational institutions to give equal importance to art subjects in their curriculum.

The Vice President was speaking at the investiture of the Sangeet Natak Akademi and Lalit Kala Akademi Fellowships along with Akademi Awards for 2018 and 62nd National Exhibition of Art Awards. He presented the honours to various artists for their contribution to the field of performing arts and fine arts.
Referring to ‘Azadi Ka Amrut Mahotsav’ celebrations, Shri Naidu said that many unsung heroes made sacrifices for our freedom but their stories remain largely unknown to the masses as they did not get enough attention in our history books. He called for correcting these distortions and highlight the contributions made during the freedom struggle by these lesser known heroes.

Recalling the role of visual and performing arts in arousing patriotic feelings during the independence movement, the Vice President said that art was used as a “powerful political weapon” to tell the stories of British oppression in an effective manner. He recalled how the fiery patriotic songs and poems of Rabindranath Tagore, Subramania Bharati, Kazi Nazrul Islam and Bankim Chandra Chatterjee inspired strong feelings of nationalism among the masses. “The contribution of our freedom fighters through powerful artistic expression is integral to our freedom struggle and must not be forgotten”, he stressed.

Lauding the contributions of artists in “strengthening the thread of continuity connecting our rich past to the present and future”, Shri Naidu observed that art unites people across cultures, influences and inspires them, thus “becoming a powerful agent of change in the process”. “It is the duty of each one of us to preserve and promote our grand cultural traditions and various art forms”, he said.

The Vice President said that India has a grand tradition of highly refined art, backed by theories mentioned in ancient texts. Shri Naidu called for preserving visual and performing arts which he said are “intertwined with the intangible cultural heritage of the nation and shape our national identity”.

On this occasion, the Vice President noted that India’s rich tradition of folklore is one area that needs immediate attention and calls for urgent action. He said that with the passage of time various forms of folk traditions have been on a decline and the “onus is upon us to make every effort to preserve our great folk traditions”.