Haryana Chief Minister Manohar Lal Khattar said that he will make Panchkula as a developed city and it will be the second ideal metropolis of the country after Gurugram.

The Chief Minister made this announcement while addressing the “Jan Vikas Rally” of Panchkula district organised at Tau Devi Lal Stadium, Sector-3, Panchkula.

The Chief Minister said that Panchkula city would be developed in every sphere, be it education, health, enterprise or service sector projects. He said that Panchkula is the Gateway of Haryana situated at the foothills of Shivalik. The leaders who had converted Panchkula from a small village to a city and promised to make it a model city, after coming to power, forgot it and moved all the projects to Gurugram. However, Gurugram is the financial capital of the state and it is included in the icon cities of the world. More than 200 renowned Fortune companies of the world have their offices in Gurugram. Thus, the Chief Minister assured that Panchkula’s development will be at par with Gurugram.

The Chief Minister said that from sports viewpoint, an international-level Sports Stadium is located at Tau Devi Lal Stadium, Panchkula. In the coming June, ‘Khelo India’ will be organised in this stadium, wherein more than 14,000 players are expected to participate. Similarly, air sports, water sports and adventure sports have been started here at Tikkar Tal in Morni and Panchkula has emerged as a suitable holiday destination which has given a boost to its tourism potential as well. He said that Panchkula would not only be an ideal city for sports or tourism but the district is also famous from spiritual viewpoint as Shri Mata Mansa Devi Temple is located here.

The Chief Minister announced that a film city is being constructed on 60 acres of land at HMT Pinjore. Many filmmakers of Bollywood have expressed their desire to come here. He said that soon a medical college would be opened in Panchkula as well. Apart from this, AYUSH AIIMS is being built near Mata Mansa Mansa Devi on the lines of AIIMS located in Delhi. Panchkarma Centre is being set up on the lines of Delhi and Kerala at Nature Camp, Thapli. Similarly, industrial estate is being distributed by HSIIDC in Barwala to develop Panchkula from industrial viewpoint.

The Chief Minister said that after the initiation of the Parivar Pehchan Patra, the saying in Hindi language ‘Pyasa Kue Ke Pass Jata Hai’ has been upturned and now the government will go to the poor and needy and extend the benefits of government schemes at their doorsteps. Now, the beneficiary has to only sign the consent form to take advantage of these schemes. He said that persons earning less than Rs. 1.80 lakh per annum are being identified so that they can be extended the benefits of these facilities at their doorsteps.

The Chief Minister said that Antyodaya Parivar Utthan Melas have been organised to enhance the income of the families with less than Rs. 1.80 lakh per annum income and to make them self reliant, loans will be provided through banks for business of any kind. The Chief Minister Khattar said that he believes in stand up policy while some leaders are making people lethargic by saying that they would dole out free benefits.

The Chief Minister said that in view of all the demands put forth by Panchkula MLA Gian Chand Gupta, Mayor Kulbhushan Goyal and former Kalka MLA Latika Sharma, for the year 2022-23, they would give Rs 45 crore for the Haryana Rural Development Fund and under the Municipal Corporation and Municipal Council Rs. 118 crore for urban areas so that they can get minor works done at their level.

While duly launching the Panchkula Metropolitan Development Authority by introducing the logo of Panchkula Metropolis, the Chief Minister announced to give two projects worth Rs 175 crore to the Authority for the first phase. Apart from this, the Authority will also get the work done under PPP mode for multi-level parking in the sectors and the VGF gap will be borne by the Government.

The major schemes announced by the Chief Minister include Haryana International Arts Centre at a cost of Rs 75 crore, Kajoli Water Works at a cost of Rs 16 crore, new fire stations in Pinjore, Barwala and MDC worth Rs 151 crore. Apart from this, Rs 16 crore for High Rise Fire Brigade, bridge over Tangri river in Kalka and dam for village Baladwala, Rs 35 crore for new Civil Hospital in Kalka, development of Raipur Rani PHC with 25 beds, Rs 25 lakh for construction of Pinjore Bus Stand, Rs 50 crore for retaining wall near PWD Rest House Pinjore, plans to upgrade new dispensary and schools in Dunaraitan area are also included.

Ambala Lok Sabha MP Rattan Lal Kataria in his address said that the Chief Ministe Manohar Lal Khattar has done numerous developmental works since 2014 in Panchkula district worth Rs. 5,000 crore. The Chief Minister has also completed the works which were not done in the state in last 55 years. He said that the Chief Minister Khattar is at 12th position in the list of 100 Powerful Persons of India released recently. Even Prime Minister Narendra Modi says that Khattar always completes the projects he takes up.

On this occasion, Speaker of Haryana Vidhan Sabha and MLA of Panchkula and organizer of Jan Vikas Rally, Gian Chand Gupta expressed gratitude to the Chief Minister for attending the rally. He said that though the Chief Minister himself takes interest in the development of Panchkula, yet he would like to present some demands of the people before the Chief Minister. Among them were, making a plan for the rehabilitation of 7,000 slums in Panchkula, upgradation in the sectors across Ghaggar, removal of section 7-A, setting up of sub-yard for procurement of crops near Ramgarh, to upgrade medical college in Panchkula into a 500-bedded Civil Hospital 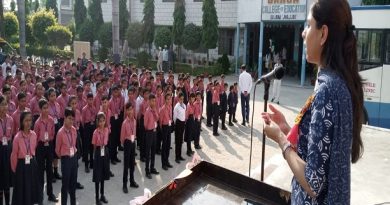 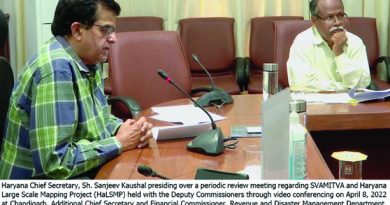