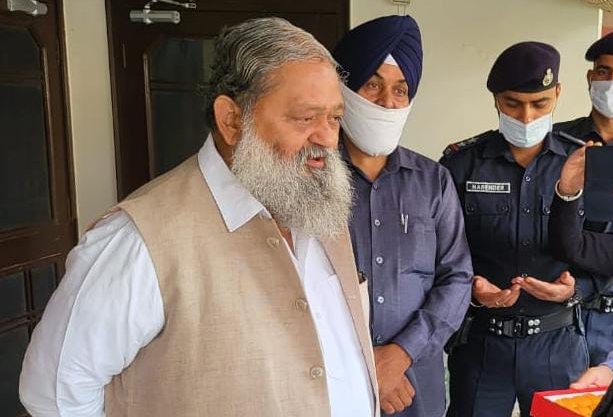 Home Minister Anil Vij was interacting with journalists while redressing to public grievances at his residence in Ambala today.  He said that in the last few years, the country faced a great tragedy like corona, but despite this, the government gave free tests, free treatment and free medicines and certainly this did not happen in any part of the world.  Despite this tragedy, the economy of the country is better now today.

At the same time, the Home Minister Sh. Vij took a jibe at the Aam Aadmi Party and said that now you have a government in Punjab, now they should construct the unfinished part of SYL in Punjab.

The government did not impose tax on dreaming – Anil Vij

Hitting back at Aam Aadmi Party MP Sushil Gupta, Home Minister Anil Vij said that till now no government of India or the world has imposed tax on taking dreams, so Sushil Gupta can take many dreams as he wants.  It is worth mentioning that last day MP Sushil Gupta had claimed victory of the party in the next assembly elections.

Despite the corona effect, the country’s economy is better – Vij

On the allegation made by Congress leader Surjewala regarding rising inflation, Home Minister Anil Vij retaliated and said that such a big corona tragedy came and we suffered it.  But, despite this, the Government of India did free tests, free treatment, free vaccination of Covid.  This has not happened in any part of the world.  Because of this, our economy was affected, from which efforts were also made to emerge.  The government also issued special packages. He said that now we are doing a good economy project of 9.2.

Health Minister Anil Vij said that from April 10, Precaution dose is going to be started for above 18 years age group and any person above 18 years of age can get this dose administered at their nearest vaccination centre.  It is worth noting that this Precaution dose can be administered after a gap of nine months or 39 weeks after the second dose.

There will be dialogue with the farmers- Vij

At the same time, on the demand of the farmers to make the toll plaza free, the Home Minister Vij said that whatever the demands of the farmers, they will be discussed with them.