The stage is set for a grand function at Panipat City being organized by Manohar Lal Khattar led Haryana government to mark the 400th Parkash Purab of Guru Teg Bahadur Ji.

A grand pandal built on 25 acres in Sector 13-17 of Panipat has become the Centre of attraction for the people of Panipat for the last three days. Besides this, adequate parking arrangements have been made on 60 acres for this big event.

Member of Parliament, Sanjay Bhatia, who is also the Convener of the Event Management Committee has expressed gratitude to the District Administration as well as to the Director-General, Information, Public Relations and Languages, Dr. Amit Agrawal and other officials for their cooperation in organizing the programme, preparations for which are going on from last one month.

Bhatia said that it is a matter of pride for the entire State as they would be witnessing this grand and historic celebration. People will not be able to forget this grand programme that is being organized in Panipat under the dynamic leadership of Manohar Lal Khattar.

The Information, Public Relations and Languages Department has made special arrangements for the live telecast of the event. For this, a hi-tech media center equipped with double leased internet lines facility has been set up near the Pandal.

The reverence of the people of Haryana towards Sri Guru Tegh Bahadur Ji can be gauged from the fact that Kushal Singh Dahiya, a farmer from Badkhalsa, Sonipat, had offered his head in the service of Guru Ji.

History tells that on November 9 in the year 1675, on the orders of Mughal emperor Aurangzeb at Chandni Chowk in Delhi, when Sri Guru Tegh Bahadur Ji was beheaded, then Guru’s Sikh brother Jeta Ji ran towards Anandpur Sahib with Guruji’s head. The Mughal army was after him and he hid in the village of Badkhalsa in Sonipat.  He narrated the entire incident to the people there, thereafter the villagers formulated a plan to safely take the holy head of Guru Ji to Anandpur Sahib. To execute this plan, Kushal Singh Dahiya, who used to resemble Guru ji, offered his head in the service of Guru Ji. Later, the Mughal soldiers who reached the village took Kushal Singh’s head assuming it to be the head of Guru ji and took it to Delhi and Bhai Jeta, who was hiding, left for Anandpur Sahib with Guru Ji’s head.

A grand pandal built at Panipat for the 400th Parkash Purab celebrations by Haryana Government. 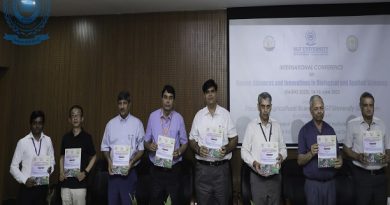