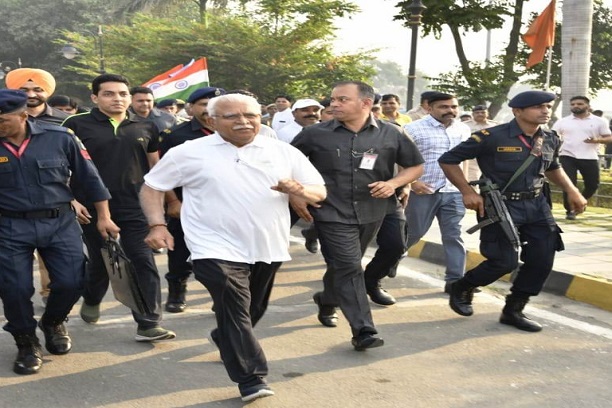 Haryana Chief Minister Manohar Lal Khattar today said that the youth brigade of the state has made a mark in the world in the world of sport. He compared them to a diamond on the basis of their power, sharpness and sterling performance.

Khattar was speaking at the inaugural session of the state’s first Sansad Khel Competition organized in the series of programmes as part of Azadi ka Amrit Mahotsav by the efforts of Member Parliament, Naib Singh Saini on Brahmasarovar in Kurukshetra on Sunday.

The CM said that efforts are being made by the State Government to make this youth power capable as well as meaningful. It is only because of these efforts that programmes like Sansad Khel Competitions will inspire the youth to move forward, help others and contribute to the progress of the country.

Earlier, Khattar, Saini, Minister of State for Sports and Youth Affairs, Sandeep Singh, and Minister of State for Women and Child Development Kamlesh Dhanda duly lit the traditional lamp and inaugurated the competition. They also  flagged off the Marathon of the Sansad Khel which will run from May 15 to 18.

Along with the Chief Minister, Saini, Singh and Krishan Kumar Bedi also ran the Marathon till South Gate of Brahmasarovar. More than 3,000 men and more than 2,000 women from Kurukshetra Lok Sabha constituency ran the marathon. The race started from Purushotampura Bagh and ended at Dronacharya Stadium via South Gate of Brahmasarovar, Sri Tirupati Balaji Temple, BR International Chowk, Brahmananda Chowk and Udham Singh Chowk. They presented medals and cash awards to Amarpreet Singh of Ambala, and Ritika of Ambala who stood first in the men’s and women’s category respectively and honoured Mohit Pradhan of Yamunanagar, and Anjali of Dayalpur Kurukshetra who stood second in their respective categories.

As soon as the Chief Minister reached Purushotampura Bagh, seeing the enthusiasm of the players, he greeted everyone and made everyone chant Bharat Mata ki Jai. He said that these programmes will inspire the youth and participation in this Marathon will also increase the physical development, collective strength and enthusiasm and zeal of the youth. Saini informed that wrestling, circle kabaddi and marathon have been organized in this sporting event from May 15 to 18. In these competitions teams have reached from block level.  In this event, 30 men’s and 26 women’s teams will display their strength.

Khattar also launched the Khelo India Promotional Song and said this will work to instil enthusiasm among the young sportspersons coming from different states of the country.