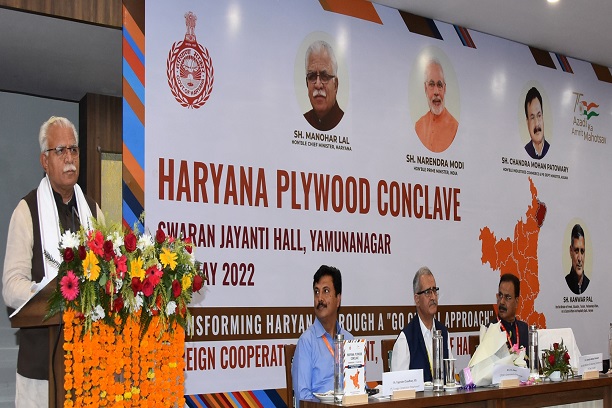 Haryana Chief Minister Manohar Lal Khattar today said that the government’s primary aim is to save foreign exchange by promoting exports, for which the plywood market has to be recognized on the international platform. If the states work together, then Ek Bharat- Shreshtha Bharat will be formed. While giving exemption to the industrialists of the plywood cluster, the Chief Minister announced that the industrialist who exports the goods of his factory, the market fee of 2 percent will be returned to that industrialist. He said that if the plywood industry of Haryana gives employment to the people of Haryana, then the government will return Rs 48,000 per person per year to the industrialists for 7 years.

Khattar said that 1.5 per cent subsidy will be given to any new plywood industry that will be set up for 10 years. He said that one per cent subsidy would be given for exports in the industry, subject to a maximum amount of Rs 10 lakh. Apart from this, he also announced to set up Forest Research Centre in Yamunanagar at a cost of Rs 50 crore that would benefit industrialists and farmers here.

The Chief Minister was speaking as the Chief Guest at the Plywood Conclave organized at Swarna Jayanti Hall in Yamunanagar on Monday.

He said that last year Rs. 8,000 crore of plywood was produced in Haryana, but out of that plywood was worth Rs. 95 crore was exported which is relatively low. He said we have to think of ways to increase domestic exports so that the economic condition of the state can be improved.

He said that Yamunanagar has the largest plywood industry in North India. There is a need to think about how to increase its exports. He said that the Indian plywood sector is expected to grow by 5.5 per cent by 2026. The Chief Minister said that in 2015, work was going on in plywood on its own accord. About 950 plywood industries were working at that time. New licenses were not being given to run the industry. Bribes of crores of rupees was being demanded for licenses. But now all the applications for the promotion of industries have been accepted.

He said that industrialists should be given facilities to promote industries. Under this, the industrialists who export their goods will be given 1.5 percent annual subsidy for 10 years. He said that a Common Facilitation Centre is being established in Yamunanagar under the Medium Level Enterprises Cluster Development Scheme by the Government to help the plywood units in Haryana. This Common Facility Centre will help plywood manufacturers to improve the quality of their products, initiate product differentiation, and suggest ways to reduce the cost of production.

Industries Minister of Assam, Chandra Mohan Patowary said that under the leadership of Chief Minister, Manohar Lal Khattar, Haryana is progressing continuously towards development. He said that there is a lot of potential in the field of plywood. If the people of Haryana want to set up plywood industry in Assam, then all the necessary facilities are available there.