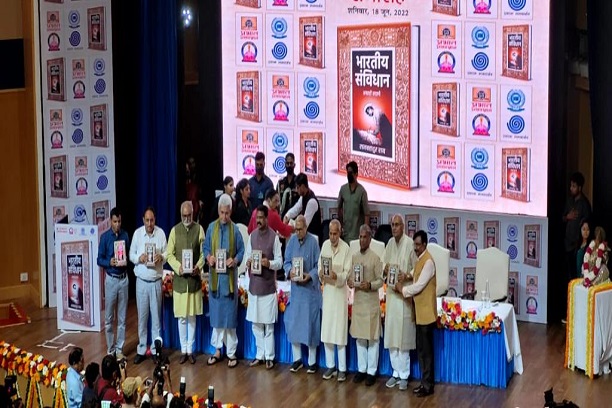 Prime Minister Narendra Modi has said that today, the nation is making a collective effort to bring to the fore the untold chapters of the freedom movement during the Amrit Mahotsav of freedom.

Delivering his address through a video message on the release of the book “Bhartiya Samvidhan: Ankahi Kahani” authored by veteran journalist Padmashri Ram Bahadur Rai, Chancellor of Shree Guru Gobind Singh Tricentenary University, Gurugram, on Saturday evening in Dr. Ambedkar International Centre in the national capital, the Prime Minister said that the warriors, who were forgotten even after sacrificing everything, the events that were forgotten even after giving a new direction to the freedom struggle, and the thoughts that infused energy to the freedom struggle, became distant from our resolutions even after independence. “The country is now binding them together again so that the consciousness of the past can be strengthened in the India of the future. Therefore, the youth of the country are today researching and writing books on untold history. Many programs are being organized under the Amrit Mahotsav. This book ‘Bhartiya Samvidhan: Ankahi Kahani’ will serve to give a new impetus to this campaign of the country. Along with the history of independence, the untold chapters of our Constitution will give a new thinking to the youth of the country and broaden their discourse,” Sh. Modi added.

Referring to the context of the Emergency behind Sh. Rai’s book, the Prime Minister said “synergy of rights and duties is what makes our constitution so special. If we have rights, we also have duties, and if we have duties, then the rights will be equally strong. That is why, in the Amrit Kaal of  Azadi, the country is talking about sense of duty and giving so much emphasis on duties.”

The Prime Minister also emphasized the need for widespread awareness about the constitution.

“How Gandhiji gave a lead to the concept of our Constitution, Sardar Patel freed the Indian Constitution from communalism by abolishing the separate electoral system on the basis of religion, Dr. Ambedkar incorporating fraternity in the preamble of the constitution shaped ‘Ek Bharat Shreshtha Bharat’, and how scholars like Dr. Rajendra Prasad tried to connect the constitution with the soul of India, this book introduces us to such untold aspects”, he added.

Union Minister for Education Sh. Dharmendra Pradhan, Deputy Chairman of Rajya Sabha Sh. Harivansh and Lieutenant Governor of Jammu and Kashmir Sh. Manoj Sinha lauded Rai’s efforts and said these were results of four decades of research by the veteran journalist. In his address, Padmashri Ram Bahadur Rai said that in his book people will find several unknown aspects about the Constitution.

Sh. Sachchidanand Joshi, a member of the INGCA and Sh. Manmohan Singh Chawla, Managing Trustee of SGT University welcomed the the eminent guests with bouquets before the start of the event. 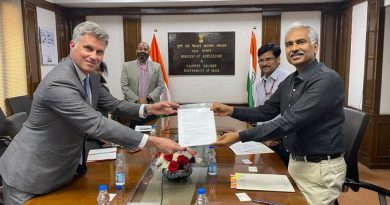