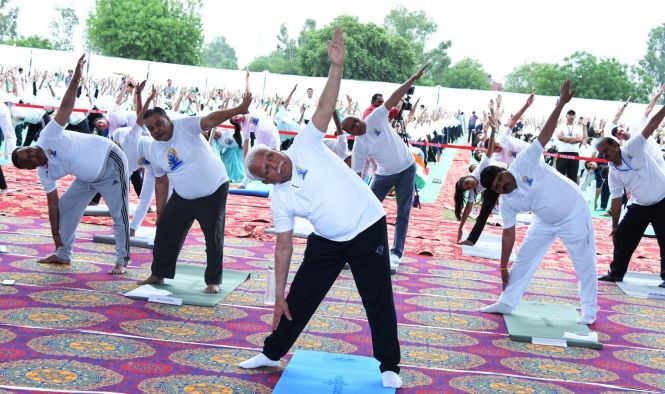 Haryana Chief Minister Manohar Lal Khattar today said that youth must take a pledge on Yoga Day to stay away from drugs. For this more and more medicinal plants should be grown and utilised to get rid of intoxication.

The Chief Minister was addressing a state-level function on the occasion of 8th International Yoga Day organized at Bhim Stadium, Bhiwani today. He said that drug addiction is increasing day by day, which is fatal to society. Therefore, youth should take a pledge on Yoga Day to stay away from drugs.

He said that the youth should contribute significantly to making the earth green by planting a tree. It is also necessary for them to protect themselves by planting trees for three consecutive years, this will also purify the environment and people will have a clean environment.

The Chief Minister said that on the auspicious occasion of International Yoga Day, every citizen should take a pledge to do yoga every day. By doing yoga, the human body remains completely healthy. He said that yoga will be included in the curriculum of schools from Classes I to XII in order to take it forward, so that students can easily adopt it and get benefitted. For this, yoga teachers and volunteers will be made ready. Youth will also be able to take AYUSH degree at the college level. For this, a postgraduate yoga, naturopathy, and research institute is being established in Devarkhana village of Jhajjar. Apart from this, AIIMS of AYUSH is also being built in Panchkula, the building of which will be ready soon.

The Chief Minister further said that if a person wants to be healthy, then yoga must be adopted in life. He himself did yoga activities continuously for two hours and encouraged people towards yoga. Yoga not only keeps the body healthy but can also help get rid of many diseases.

The Chief Minister said that if you adopt yoga, you will get freedom from diseases and the expenditure of the health department will also be saved, which can be spent on other works. For this, 1,000 yoga schools and gymnasiums are being opened by the government. He said that Yoga Day should be celebrated as Nirog Diwas and Yoga should be a part of daily routine.

The Chief Minister said that 5,000 years ago, sages adopted yoga practice and Prime Minister Narendra Modi had proposed to recognize yoga as International Day of Yoga in the United Nations General Assembly meeting in 2014, which was celebrated by 177 countries. Now more than 200 countries of the world have recognized yoga. The Chief Minister also thanked Yoga Guru Baba Ram Dev who made people aware of Yoga.

Additional Chief Secretary, Health Department Rajeev Arora said that approval has been given to set up AYUSH cells in 419 primary health centres of the state to provide facilities for AYUSH treatment. Apart from this, health and wellness centres are also being set up in many district headquarters and sub-divisional level hospitals. Shri Krishna Ayush University is being established in Kurukshetra. Apart from this, construction work is going on for Baba Khetanath Government Ayurvedic College and Hospital, Narnaul. Director General, Department of AYUSH, Dr. Saket Kumar, while addressing the programme said that it is a matter of joy for the people of Bhiwani that the state level function of 8th International Yoga Day is being organized at Bhim Stadium here. Apart from this, a Centre for Panchakarma Vidya has also been opened in the AYUSH wing of the Civil Hospital, which people should take advantage of. 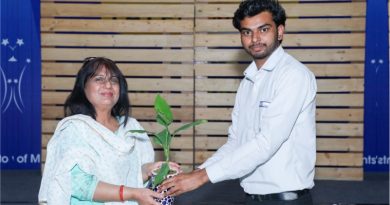