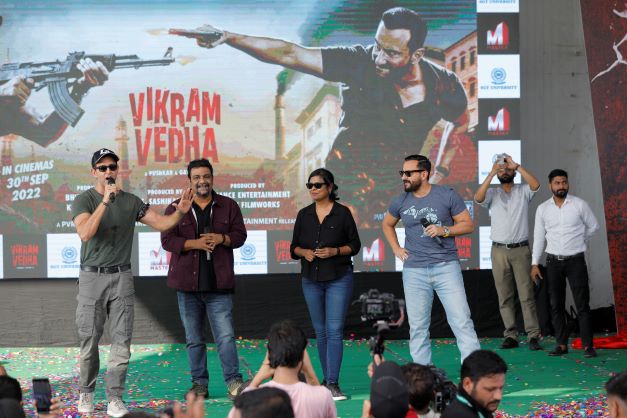 Hrithik Roshan and Saif Ali Khan, a few of the most talented men in Bollywood, paid a visit to SGT University today. Their most recent film, ‘Vikram Vedha,’ will hit the theatres on September 30, 2022. So, today, the complete Vikram Vedha team visited SGT Campus to promote their brand new flick and songs. There was a large gathering of all SGT students, as well as faculty members, non-teaching personnel, and other people from the SGT hospital and the surrounding area.

The audience was so excited to meet the stars that they waited for two hours on the main ground on the sweltering summer day. The audience was filled with Hrithik and Saif’s ardent admirers. The crowd was ecstatic about the event and stayed for the entire performance. Overall, the audience was completely engaged. This was their first visit to Gurugram for movie promotions. Aditya, a core member of the Prabandhan team- the student council of SGT University and a student of the Faculty of Pharmacy, received the opening ticket for the Vikram Vedha film, which the group released today. Hrithik and Saif presented Aditya with the opening ticket, which had their autographs and Aditya’s name on it. It was a lot of joy for all of the SGTians to see such significant celebs on campus today. Everyone was grateful to the ‘Vikram Vedha Team for taking the time out of their schedule and visiting campus. Despite having exams, students came to campus solely to catch a peek at Hrithik and Saif. Everyone praised their collaborative performance. And, given that this was their first off-screen promotional appearance for the film, they were in great form and spirits. University students also created various reels for their newly released movie tune, ‘ALCHOHOLIA.’ Today’s event was fully advertised in the surrounding areas via various platforms and channels.

Understanding Depression and its Treatment