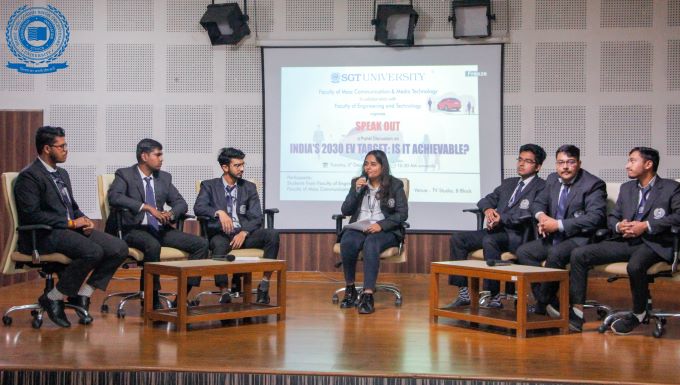 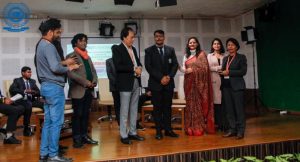 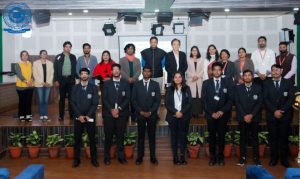 The Faculty of Mass Communication and Media Technology, in collaboration with the Faculty of Engineering and Technology, successfully hosted the second episode of Speak Out on December 6, 2022 at the TV Studio, B Block, SGT University. The topic for this panel discussion was “India’s 2030 EV Target : Is It achievable? “. The event started with the lamp lighting done by all the dignitaries present. Dr. Madan Chaturvedi, Provost, SGT University, was invited as the Chief Guest. Dr. Madan Chaturvedi, Provost, SGT University, delivered the inaugural speech emphasising the importance of EV vehicles by citing top-rated companies such as TESLA. WWhile providing examples, he referenced the concept used by the US government, which initially focused on infrastructure and later on vehicle output. Finally, he encouraged the students and wished them luck in their discussion. Prof. Sushil Manav, Dean of the Faculty of Mass Communication and Media Technology, presented the chief guest with a sapling and delivered the welcome address. In his speech, he discussed the “Speak Out” initiative, in which the faculty of mass communication and media technology will collaborate with other faculties across the university periodically to encourage students to come forward and exemplify their talent and improve skills such as public speaking and critical and analytical thinking by participated in panel discussions on current events. He discussed the Indian government’s plan, which aims to expand EV sales in India to 30% of private cars, 70% of commercial vehicles, and 80% of two and three-wheelers by 2030. He expressed gratitude to the organising committee and applauded the panellists.

Dr. Sarju Devi, HOD, Centre for Languages and Communication and Mrs. Monika Deshwal, Assistant Professor, Faculty of Engineering and Media Technology were invited as Judges for the panel discussion.

Ms. Uttkarsha Sharma, 3rd Year BJMC, moderated the event, in which 6 panelists from the Faculty of Engineering and Technology, namely Ankit Yadav, Pulkit Sharma, Tushar Dhankar, Prashant Kumar, Sreekesh and Yatharth, participated and shared their findings and perspective on the future of Electric Vehicles in India during the panel discussion. The panelists later also addressed the questions raised by the moderator, Ms. Uttkarsha Sharma, and the audience. Ms. Bhawna Tomar, German Language Expert, Centre for Languages and Communication, proposed a vote of thanks at the end of the event. In her speech, she praised all of the panellists on such a wonderful and informative discussion and motivated all attendees to be hopeful and optimistic about the overall idea of increasing EV share in vehicle sales in India.

The Panelists graced their important research on the topic and presented many factual reports and technical information on India’s EV target and its viability until 2030 to provide a clear picture and in depth details. For example, Ankit Yadav opened the panel and introduced the topic by providing information about Electric Vehicles, their types, and how they work. He presented key reports claiming that India can meet the 2030 EV target. Throughout the discussion, he countered the opposing viewpoints. Yatharth discussing various government policies such as the Auto PLI Scheme and FEAM India in the Auto PLI Scheme, which focuses on promoting domestic manufacturing as well as employment.In this scheme, 150 companies participated, with 20 selected in the four-wheeler category, including Ford, Kia, India, Tata, and Mahindra, and many more in the two-wheeler category, including Bajaj Motors and TVS. Prashant discusses the cost effectiveness and manufacturing of EVs in India. The battery is the most important component of an EV. Due to a lack of lithium, battery manufacturing in India is difficult. We primarily import lithium ion batteries from countries such as China and Taiwan.

Tushar discussed the factors that could influence people’s attitudes and prevent them from purchasing EVs. He stated that there is a significant lack of EV service options due to a lack of knowledge about this technology. There is also a lack of standardisation in charger connector types. There is also a problem with the raw material supply chain. He also presented various reports released in this context that state that this target is unattainable.

Pulkit discussed the cost of an EV and its battery. The first thing that comes to mind when thinking about an electric vehicle is the battery. The battery accounts for roughly 60% of the total cost of an electric vehicle. For example, the total cost of a Tata Nexon is around 16-17 lakhs, with the battery costing 7-8 lakhs, which is a hefty sum for a battery. He added that EV is not a budget friendly vehicle for middle class people. Sreekesh discussed environmental factors that could cause customer resistance and prevent them from purchasing electric vehicles. He also mentioned the issues with EV charging stations that we may face in the future. Best speaker award was given to Mr. Ankit Yadav from the team performing for the motion and Mr. Tushar and Mr. Pulkit were graced with Best speaker title from the team performing against the motion. The rest of the panelists along with the moderator were given appreciation prizes. The event was a grand success and the Faculty of Mass Communication and Media technology is looking forward to conducting more such sessions in future. 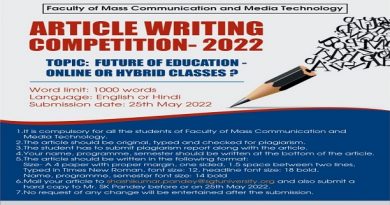 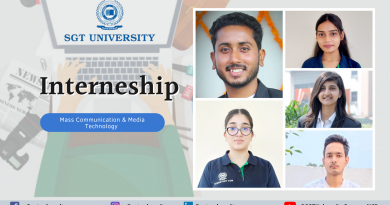